The PrimeKey EJBCA team is pleased to announce the feature release EJBCA 6.12, and a small step but important step forward in the development of EJBCA. The first changes I'd like to divulge are organisational, we added some very important personell to our team. PrimeKey has hired a dedicated tech writer, Annica, who will be helping both the EJBCA and SignServer teams to get our much maligned documentation in order. Secondly, we've started taking in some outside help for development work, integrating them into our core team in order to increase throughput. So, what is new with this release?

Having listened to all your calls of woe and distress over the state of the documentation (and I may add, much of our own), our tech writer Annica has performed a Herculean effort in shifting the entire thing over to Confluence instead of the ancient xdoc format. 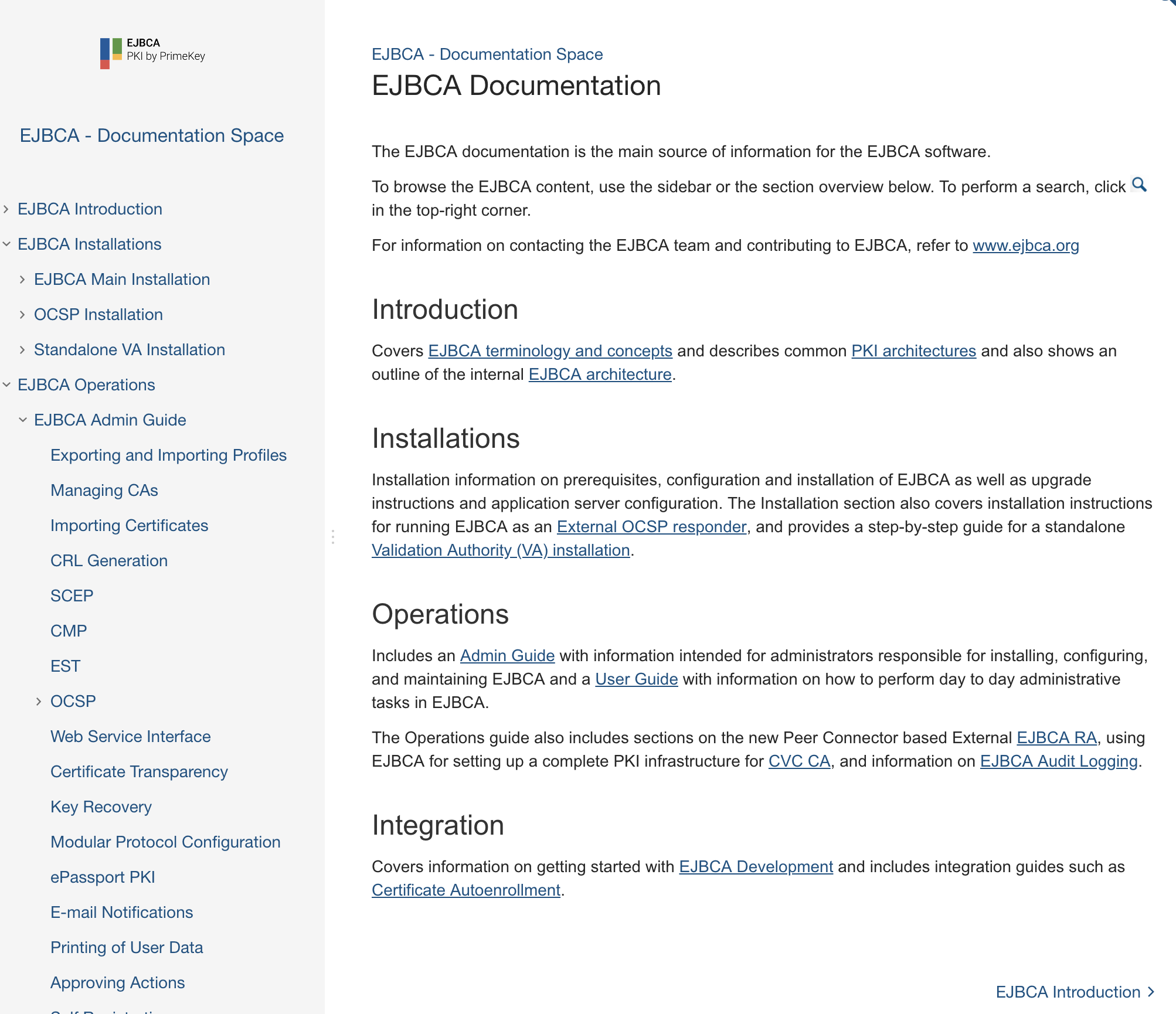 Naturally, this is just a first step towards a far more organized, updated and user friendly documentation. You may notice a sense of chaos and disarray in the current structure, and while we agree with you fully, that is merely a consequence of the already existent structure coming to light. Major changes to take notice to that the Release Notes (this document), Change Log and Upgrade Notes have all been moved in here as well. They're still available offline from within the doc folder in the release zip, but are now also published both online and deployed with EJBCA to the application server.

We've put quite a bit of work into OCSP Extensions. Those of you familiar with OCSP Extensions will probably remember configuring them through ocsp.properties configuration file.

In order to make extension configuration simpler and more precise we've moved it to the UI, and set it up to act per keybinding instead. Any existing extensions defined in the configuration files will automatically be added to existing OCSP keybinding configurations, but please read more about that and more in the EJBCA Upgrade Notes. 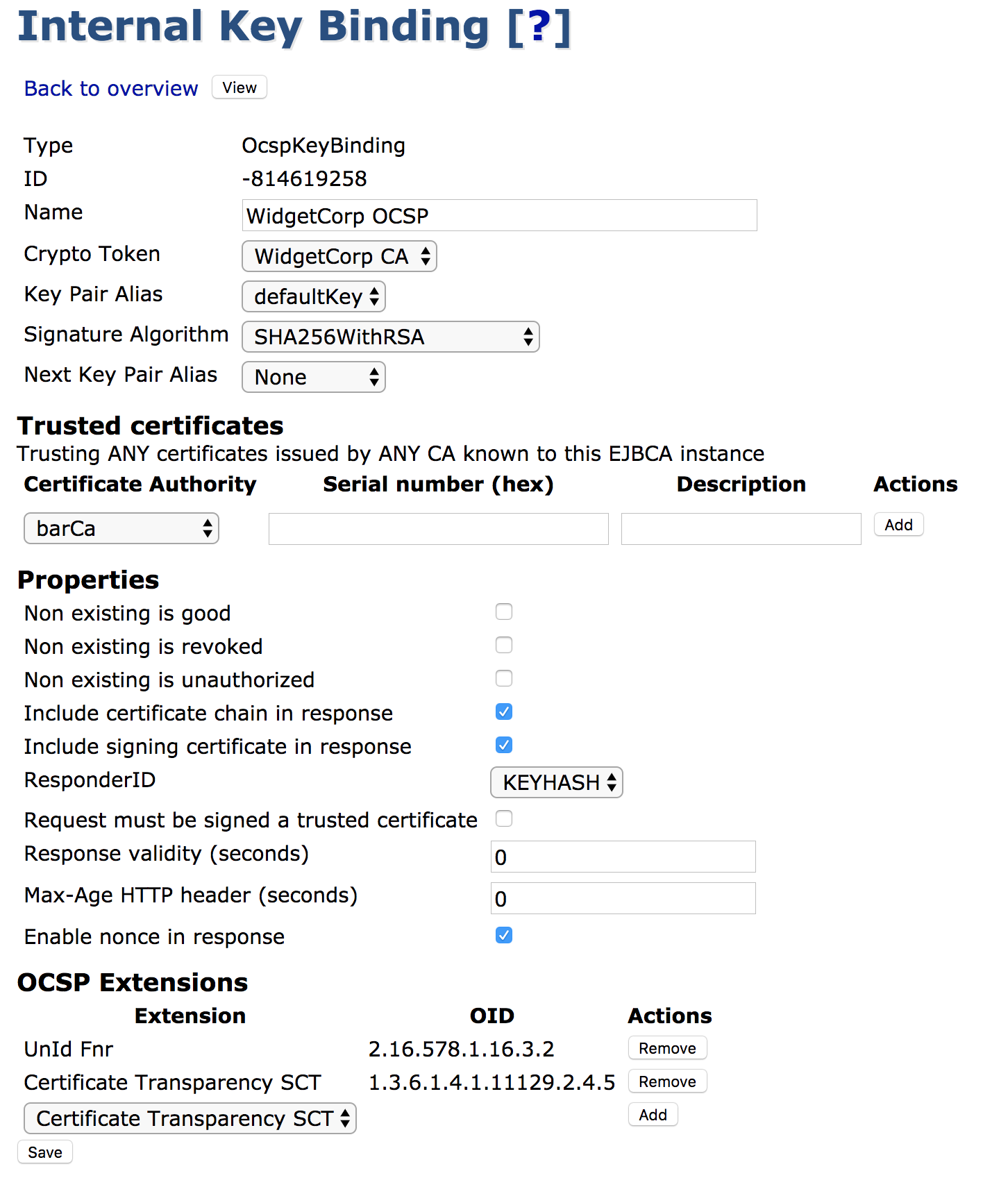 Additional Proxying Capabilities in the RA

As response to external demand, we've added two new features to the RA:

The ConfigDump Export and Audit Tool

Some of you may be previously familiar with our StateDump tool, an application for exporting and importing installations. While this has solved many problems for us and some of our customers in our past, a very common deficiency in the tool has always been that the XML based dumps are difficult to read, edit and manage, and that the data therein has never been human readable. We have thus decided to venture on remaking this tool from the ground up, and making the first iteration (which is only export capable) publicly available. It is built and run from the command line: 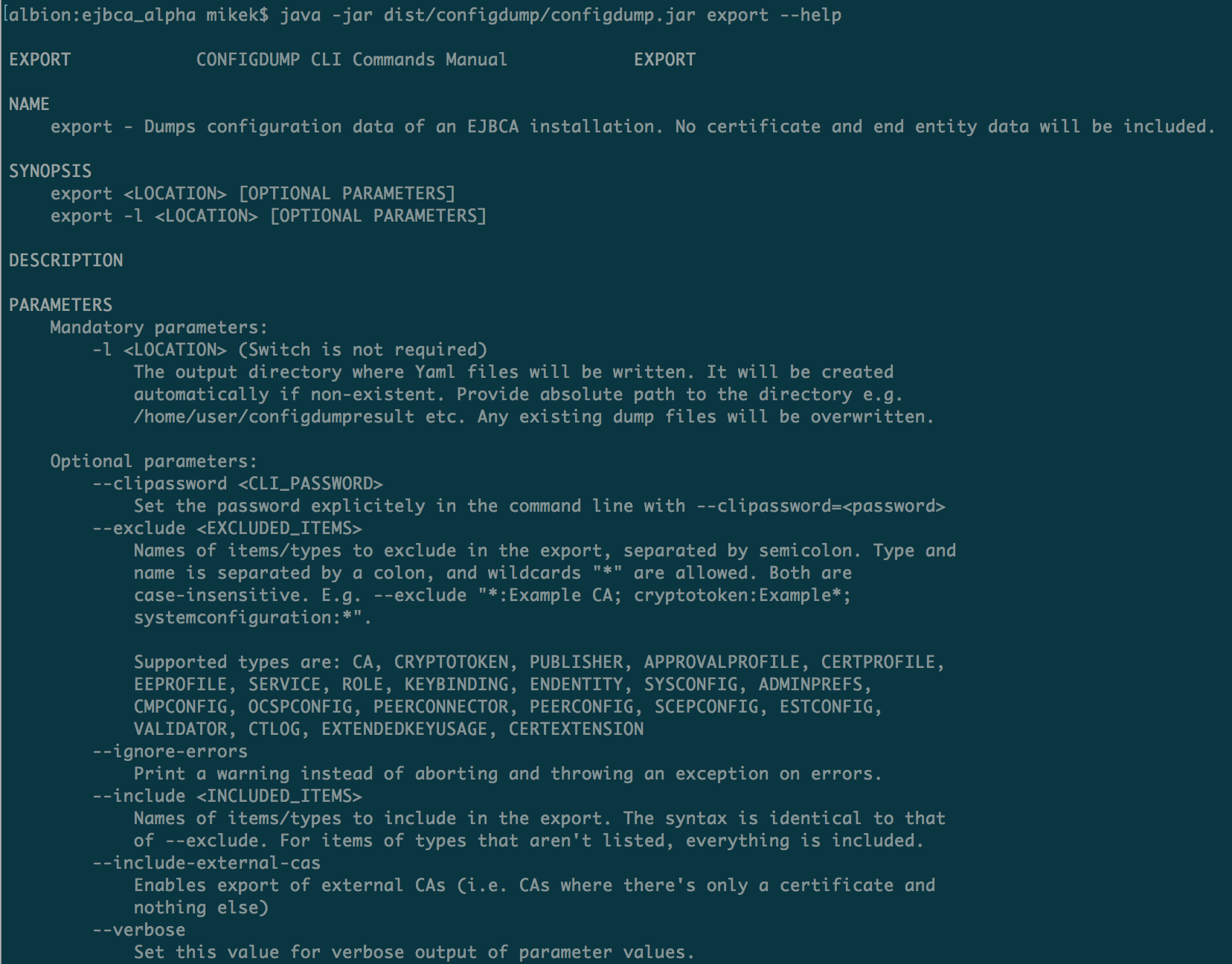 This results in a neat structure of export files sorted by type:

Which are serialized and normalized as yaml objects. Any UID references are replaced with their human-readable names. 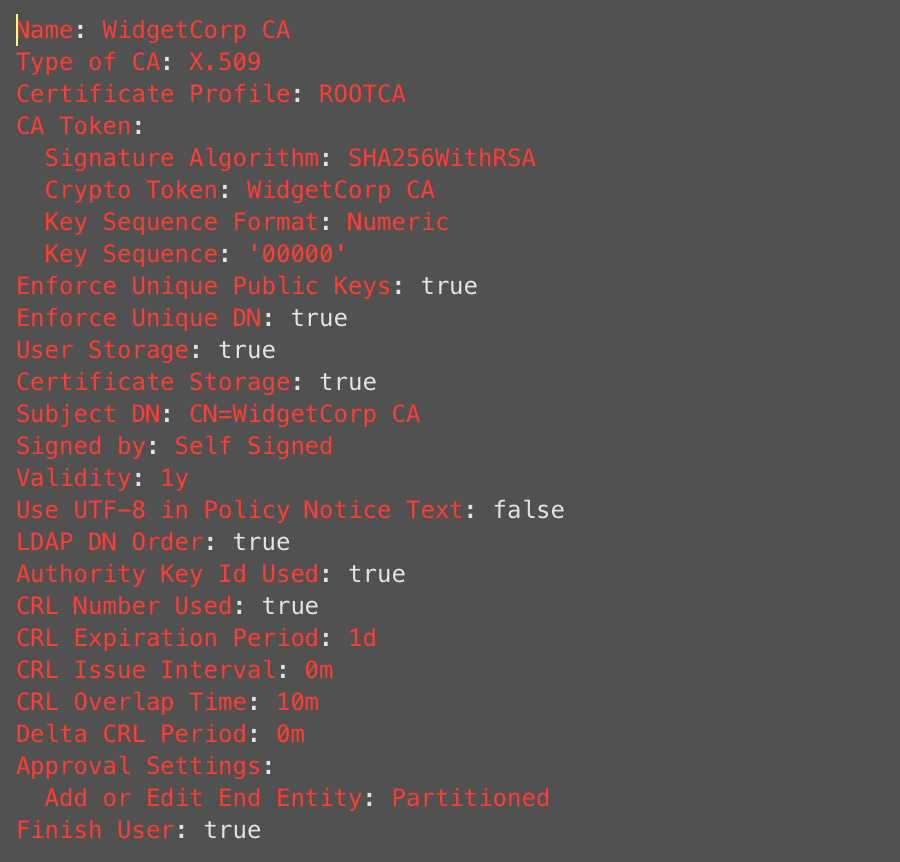 We very much hope that you'll find this tool useful in the future for change handling and auditing.

Read the EJBCA 6.12 Upgrade Notes for important information about this release. For upgrade instructions and information on upgrade paths, see Upgrading EJBCA.

For full details of fixed bugs and implemented features in EJBCA 6.12.0, refer to our JIRA Issue Tracker.

ECA-6464 - Implement UnidFnr as a Module

ECA-6477 - Create base classes for the web test module

ECA-6617 - Ensure that the Confluence docs are automatically (and always) updated with the ziprelease.

ECA-6465 - Investigate the impact of curve aliases changing in BC v1.59

ECA-6493 - Clean up warnings in CertProfileBean

ECA-6513 - Investigate and decide library to use for YAML

ECA-3417 - CaSession.getCAInfo and other get* methods in CaSession should return null

ECA-3610 - Bring all CRUD methods from UserData to EndEntityAccessSession

ECA-5382 - RA: Allow certain admins to see requests that they are not allowed to approve

ECA-5499 - Use Facelet templating instead of frames

ECA-6298 - CaInfo.getCertificateChain should return a List instead of a Collection

ECA-6352 - RA Web: Add a link back to the EE when viewing a certificate

ECA-6411 - Move ServiceManifestBuilder into its own project

ECA-6479 - Approval Partition names are not shown in the CA UI.

ECA-6596 - Improve debug logging in CT with some more details

ECA-6651 - Update all links in the PrimeKey site to point to the new documentation.

ECA-6652 - ClientToolBox: document that generatenewuser uses two WS calls, and reference to certreq for the same functionality with a single WS call

ECA-6679 - ConfigDump should handle relative paths on the CLI

ECA-6502 - Approval state is not saved in Admin GUI

ECA-6508 - ${ca.tokenpassword} in cli.xml should be quoted to allow whitespace and empty password

ECA-6538 - Modify all calls to FileUtils.writeStringToFile(...) to specify charset.

ECA-6564 - Replace the word 'Unselect' by 'Deselect' in English language

ECA-6571 - Search for expired approvals in RA Web is broken

ECA-6575 - Regression: importcacert command does not work with parameter 'initauth'

ECA-6639 - RA: New role can not be created if RA-login-role belongs to Namespace

ECA-6660 - RA: A comma in the certificate subject DN is displayed with leading /

ECA-6725 - Fields not disabled when viewing a Validator

ECA-6730 - Fix test failures due to NPE in CaTestCase